In an essay I wrote in 2011, I argued that Germany should no longer be thought of as a “civilian power” but rather as a “geo-economic power”. I argued that the weakening of the Federal Republic’s commitment to multilateralism during the previous decade and its increasing economic assertiveness, particularly within the eurozone, undermined its claim to be a “civilian power” – that is, one that used multilateral institutions and economic co-operation rather than military power to achieve its foreign policy goals. The concept of “civilian power” was originally used by François Duchêne to describe the European Union and was applied to the Federal Republic by Hanns W. Maull, who, in one of his first essays on the subject in the early 1990s, described Germany and Japan as “new civilian powers” – “prototypes” of “a new type of international power”. So if Germany is no longer a “civilian power”, what about Japan?

END_OF_DOCUMENT_TOKEN_TO_BE_REPLACED

Last week I spent a few days in Helsinki, where I took part in a panel discussion about European foreign policy organised by the Finnish Institute of International Affairs. It was an interesting time to be there. The issue on everyone’s minds, just like everywhere else right now, was the Ukraine crisis and in particular the implications of the Russian annexation of Crimea last month. St. Petersburg is less than 200 miles away from Helsinki and Finland was part of the Russian empire for 108 years until it became independent in 1917. Russia still feels very present in Helsinki – for example a statue of Tsar Alexander II stands in front of the neo-classical Lutheran cathedral in the centre of the city. So during my time there, I was particularly interested to hear from officials, analysts and journalists about the complex relationship between Finland and Russia.

END_OF_DOCUMENT_TOKEN_TO_BE_REPLACED

Europeans, particularly “pro-European” Europeans like me, often make the argument that it is only by pooling their collective resources that can they compete in the emerging world of continent-sized powers such as China, India and the US. By jointly pursuing their interests, the 28 member states of the European Union – the world’s largest trading bloc – can have greater impact than any of them can have individually. In particular, this argument is often deployed to show why it would be a mistake for the UK to leave the EU: to do so would commit it to “geopolitical oblivion”, as a French official put it to me. The idea, in short, is that size matters, as Peter Mandelson put it at a dinner I attended a year or so ago. But interestingly (and perhaps slightly worryingly), this discourse about size echoes the one in Europe at the end of the nineteenth century.

END_OF_DOCUMENT_TOKEN_TO_BE_REPLACED

I spent the weekend at a conference at Wiston House in Sussex, where you can’t help think about history. Wiston House is owned by Wilton Park, a foundation set up after the end of World War II that was originally based at an estate near Beaconsfield, where German POWs (including Helmut Schmidt) discussed democracy with British intellectuals. Kingsley Martin, the editor of the New Statesman, called Wilton Park a “prisoners’ university” that was “the nucleus of what might become a new democratic Germany”. It was set up by Heinz Koeppler, a Jewish-German émigré and in 1948 was taken over by the Foreign and Commonwealth Office to hold conferences. In 1951 it moved to Wiston House, parts of which date back to the sixteenth century. In such surroundings, it’s hard not to think in historical analogies – especially when it comes to Germany.

END_OF_DOCUMENT_TOKEN_TO_BE_REPLACED

I’ve recently been having a debate with Josef Janning of the German Council on Foreign Relations (DGAP) about German power in the European Union. In May Janning published an article on DGAP’s website in which he challenged the assumption that Germany was “calling the shots” in the EU and attempted to quantify various dimensions of member-state power. In my response I argued that Janning underestimated Germany’s power as the eurozone’s largest creditor and also stopped short of spelling out the implications of his correct but rather alarming conclusion that other member states could outvote Germany if they joined forces – in effect an anti-German coalition. In his response to me, Janning argued that I overestimated German power within the EU by too narrowly focusing on the euro crisis and disregarding British and French military capabilities. In my second response, I argued that although military capabilities allowed France and the UK to project power beyond Europe, they are not a source of leverage within Europe.

Since writing an essay on “Germany as a geo-economic power” in 2011, I’ve been thinking a lot about the concept of “geo-economics”. Although the term is being used a lot at the moment, there is no shared definition of it. (Sanjaya Baru, who runs the programme on geo-economics at the International Institute for Strategic Studies, had a good introduction to the various usages of the term in Survival, which was originally written as an introduction for a conference on “geo-economics” in Bahrain in March 2012 that I attended.) There are basically two versions of the term: a “soft” version that is meant to capture the way states increasingly seem to pursue economic objectives and a “hard” version that is meant to capture the way that states increasingly seem to use economic means to achieve strategic objectives.

END_OF_DOCUMENT_TOKEN_TO_BE_REPLACED

There are multiple ways of looking at the euro crisis. Northern Europeans in general and Germans in particular tend to look at it as a crisis caused by fiscal indiscipline by southern European countries in general and Greece in particular, who didn’t stick to the rules. Others, particularly in France, look at it above all as a crisis caused by unregulated financial capitalism, which created banks that were too big to fail and therefore had to be bailed out by governments. Others still, particularly in the UK, look at it above all as crisis caused by the flawed architecture of the euro itself – a common currency without a common treasury – which meant it could never work. But if you take an even longer view, it’s also possible to see the euro crisis as the unforseen consequence of German reunification.

END_OF_DOCUMENT_TOKEN_TO_BE_REPLACED

In a piece about Germany as a geo-economic power that I recently wrote for Internationale Politik, a German foreign-policy journal, I argued that Germany’s “special relationship” with Israel might in future weaken. It seems to me that the relationship is all that remains of the foreign policy based on the idea of Auschwitz as Germany’s raison d’état that Joschka Fischer sought to develop (a theme of my book, Utopia or Auschwitz). Although Chancellor Angela Merkel is personally committed to the Jewish state, I think she is under increasing pressure from an anti-Israeli public opinion and from Germany’s economic interests with the Arab world.  I also wonder whether a dramatic event – such as an Israeli military strike on Iran – could be a tipping point that creates a rupture between Germany and Israel in the way that the Iraq war did between Germany and the US.

END_OF_DOCUMENT_TOKEN_TO_BE_REPLACED 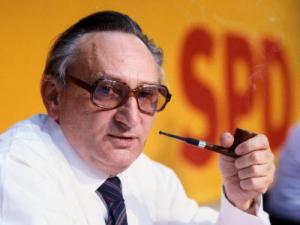 I’m currently working on an academic paper on the concept of “normality” in debates about German foreign policy since reunification. In that context, I’ve been reading a lot about Egon Bahr, who I argue played a crucial role in the late 1990s and early 2000s in redefining “normality” in terms of a foreign policy based on sovereignty and the pursuit of national interests. As Chancellor Willy Brandt’s foreign-policy adviser in the early 1970s, Bahr was the architect of West Germany’s Ostpolitik, a policy that dovetailed with the Nixon’s administration policy of detente towards the Soviet Union. Now in his eighties, he is a kind of éminence grise of German strategy and in particular the guru of German foreign-policy realism. In that sense, it seems to me that Bahr can be thought of Germany’s Henry Kissinger.

END_OF_DOCUMENT_TOKEN_TO_BE_REPLACED

In the last few months, the revolutions in the Middle East and North Africa seem to have transformed President Obama from a realist into an idealist. What is remarkable about this trajectory is how similar it is to that of his predecessor. When George W. Bush took office in 2001, he disdained Bill Clinton’s idealist “nation building” tendencies and in particular the idea of humanitarian intervention. But after September 11, Bush pursued his own hyper-idealist “freedom agenda”, the centrepiece of which was the Iraq war. When Obama took over in January 2009, he also repudiated the hubris of his predecessor and promised more humility in American foreign policy. During the first two years of his presidency, the United States seemed to have tilted towards realism. But just as Bush reinvented himself after 9/11, so Obama seems to have remade himself since the Arab Spring.