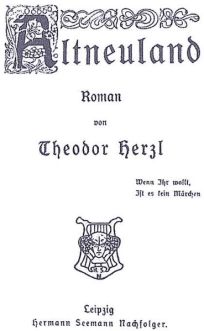 I recently read Theodor Herzl’s novel Altneuland (1902), which Walter Laqueur aptly describes in the preface to the third edition of his History of Zionism as “political science fiction”. In it, Herzl imagines the future Jewish state – which, he had argued in Der Judenstaat (1896), would be propelled into existence by the misery of Jews in the diaspora – as it might be in the twenties. But, ironically, after insisting in Der Judenstaat that he was not describing a Utopia, he proceeded in Altneuland six years later to do exactly that: Herzl’s imaginary new society is a kind of paradise in which the economy based on the principle of “mutualism” runs smoothly, education is free and women have equal rights. Most strikingly of all, however, Jews and Arabs live in perfect harmony. “Why should we have anything against the Jews?” asks an Arab character in the novel. “They have enriched us and they live with us like brothers”.

Laqueur points out that there is little in Herzl’s vision of the Jewish state that is specifically Jewish. In fact, it strikes me as a very German Utopia: the official language is German rather than Hebrew. There is even a Schwebebahn, or suspended monorail, like the one in Wuppertal that had opened the year before the novel came out and must have seemed incredibly futuristic at the time (you may remember it from the Wim Wenders movie Alice in the Cities). Israel has in some ways exceeded even Herzl’s hopes: it is a vibrant democracy of seven million people with a dynamic economy (see the recent book Start-up Nation) and outstanding universities and scientific and cultural institutions. You can still sense something of the utopian aspiration of the Zionist project in Tel Aviv – which was founded in 1909 and named after Nahum Sokolow’s translation of “Altneuland” (“old new land”) into Hebrew.

But the reality of Israel is also, of course, somewhat different than Altneuland in other ways. In fact, it feels as much like Sparta as Utopia. In the Palestine of Herzl’s imagination, there is no army – and no need for one. In security-conscious Israel, on the other hand, military service is mandatory for men and women, guns are ubiquitous (although interestingly, in contrast to the United States, there is apparently very little gun crime) and politicians often come from the military (Ariel Sharon, Ehud Barak, etc.). It goes without saying that much of this is to do with reality of the Middle East in which Israel finds itself. To put it in the terms that Robert Kagan uses in Of Paradise and Power: Herzl thought the Jewish state would exist in a Kantian world; in reality it exists in a Hobbesian world.

However, it seems to me that there is also another reason for the gap between the Jewish state of Herzl’s imagination and the reality of Israel. Although Herzl’s belief in political Zionism was a response to what he perceived as the impossibility of assimilation in Europe after the Dreyfus Affair, he was a late-nineteenth century optimist who believed in progress and did not – and could not – have foreseen the Holocaust. (In fact, in Der Judenstaat, he even expressed confidence that “governments will never take action against all Jews”.) The collective memory of the Holocaust plays an important role in the identity and politics of Israel – and in particular in its threat perceptions (see for example the current debate about the Iranian nuclear threat). This makes Altneuland a sad novel to read now – not just because the reality has failed to live up to the dream, as Laqueur suggests in The History of Zionism, but also because in a sense it was in Auschwitz that the dream died.

One thought on “Utopia or Sparta”