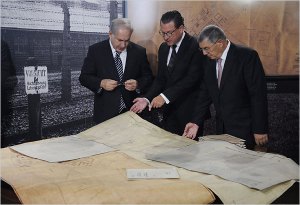 This is interesting in a morbid kind of way. The Springer corporation yesterday gave Israel the original blueprints for the Auschwitz death camp. Apparently, Springer, which publishes Bild, Germany’s biggest-selling tabloid, acquired them last year. Israeli prime minister Benjamin Netanyahu, who is in Europe for discussions with George Mitchell, accepted them on behalf of the country. The blueprints, which include sketches of for the original concentration camp (Auschwitz I) and the Auschwitz-Birkenau death camp (Auschwitz II) that was built later, will now be displayed in Yad Vashem.

I wonder what the West German student movement would have made of this. Axel Springer was supportive of Israel during the Six-Day War, one of the reasons the students hated him so much. Ulrike Meinhof wrote a particularly sarcastic column in konkret shortly afterwards. Conversely, Springer’s support for Israel seemed to them to prove Israel was a “bridgehead of American imperialism in the Middle East”. As I mentioned in a previous post, the current editor of Die Welt, a Springer-owned broadsheet, is Thomas Schmid, a former member of Revolutionary Struggle, one of the groups that emerged from the student movement.

One of the other weird connections in this story is that Netanyahu’s brother, Yonatan, was the only Israeli soldier killed during the Entebbe raid in July 1976. In what was code-named Operation Thunderbolt, 29 Israeli soldiers made a surprise landing at Entebbe airport to free Jewish hostages who had been “separated” from the other passengers of an Air France jet by two Arab terrorists and two West Germans, Winfried Böse and Brigitte Kuhlmann. Thomas Schmid actually knew Böse. When I interviewed him for my book, he told me the Entebbe hijacking was “the first time we noticed that in a sense we [the 1968 generation] were not that far from the generation we had denounced”.