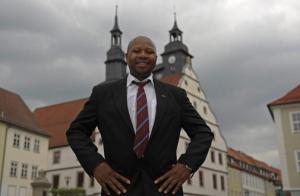 The case of Zeca Schall, a 45 year-old black German politician, got a lot of publicity during the election campaign in the eastern German state of Thuringia last month. It all started when the Christian Democrats featured Schall – until then a little-known local party official – on an election billboard along with Dieter Althaus, the Christian Democrat prime minister of Thuringia. The far-right NPD called Schall a “Quotenneger” (which means either “token negro” or “token nigger”; the German word Neger is ambiguous) and Schall was given police protection. Most of the media coverage outside Germany (CNN even covered it) focused on the persistence of racism in the former East Germany, but I actually found two other aspects of the story interesting as well.

The first is the way it illustrates an aspect of the history of East Germany that – two months before the twentieth anniversary of the fall of the Berlin Wall – is now largely forgotten. Schall came to East Germany in 1988 from Angola, which at the time was a so-called Bruderland. When you think of ethnic minorities in Germany, you usually think of those who came to the Federal Republic from countries like Turkey as so-called Gastarbeiter, or guest workers. But there were also small numbers of immigrants from other Communist countries, mostly from Vietnam but also from Angola, Cuba and Mozambique, who came to the GDR either to study or to work. Most returned home after reunification, but some like Schall (who married a German woman and took her last name) stayed. Until last month, the most well-known was Amadeu Antonio, who was killed in a racist attack in Brandenburg in 1990.

The second interesting aspect of the story is what is says about the Christian Democrats. Most of the media coverage focused on the way the far right in Germany is still extremely racist, which is certainly true, although not particularly surprising. What is surprising – to me, anyway – is the way the centre right in Germany seems to be getting less racist. Until recently, it would never have occurred to the Christian Democrats (who not too long ago ran their own dubious campaign against the recruitment of Indian software engineers) to include a black face on an election poster. Now, however, they clearly think that this is something that will appeal to potential voters, even in an eastern German state like Thuringia. In that respect, the Schall story is another illustration of the way that, as I suggested in another post, the Christian Democrats are becoming less anti-immigrant than they used to be.